This semester I am taking a class about international historical myths. The purpose of the course is to explore the myths themselves, but more importantly to understand the historical environment from which they derived and their significance within current society. Why do these myths exist? What purposes do they serve? Why sometimes when the falsity of the myth is exposed do people get angry? Why do people sometimes need to believe historical myths?

While considering potential topics for our final paper, I thought of Castlewood.

Over the summer I learned a lot about the history of Castlewood, but there were two things (an event and a person) that I never quite understood. Several park visitors interested in the history of CW mentioned Al Capone. The details of the story are fuzzy, but from what I gathered there is a circulating rumor that Capone owned land in CW, produced illegal alcohol, sold some to local taverns/individuals, and sent the remainder up the Meramec to be distributed. I have yet to find any evidence of Capone in or around CW. However, something had to have triggered this story.

The second thing was a person by the name of Eddie Paul. Paul was mentioned during several of my oral interviews. Everyone in CW seemed to know him or at least know of him, yet no one could or would give me many details. Today, he has long since passed away, and his land (home of the Lone Wolf Club) now belongs to the Wild Bird Sanctuary.  Last month I conducted an interview with a man claiming to be the oldest living Castlewood native. He and his lovely wife provided a wonderfully rich interview that helped me speculate on some aspects of the Al Capone myth.

Let’s start with Eddie Paul. From their account, Eddie Paul was one of the wealthiest men in Castlewood for most of the area’s decline (1930s – 1980s). He owned a large chunk of land, operated a local business, and supported the local community. It also seems that Paul may have been involved with the mafia or mob. According to my interviewee, in the 1970’s Paul attempted to disassociate himself from organized crime; the mafia responded by blowing up several of his automobiles.

Now let’s turn to Castlewood. As mentioned above, from 1930 – 1980 CW economy declined significantly. The once hoppin’ resort community was financially decimated by modern technology and historical events.  The availability of cars encouraged former patrons to drive further away from St. Louis (to places like Innsbrook) and the end of probation nullified the need for ‘private partying.’ Couple these phenomena with the Great Depression and you have got yourself a socioeconomic mess. According to my interviewee St. Louis County government did not provide much assistance to local families. Instead, local churches and wealthy residents privately eased the burden of those in need.

Ok, putting the pieces together: First, we have the financial decline of a once thriving river resort community. Second, we have a local celebrity both associated with organized crime and privately supporting the community in a time of need. Although it is too early to tell, I speculate that the Al Capone myth is really a romanticized version of CW’s experience with Prohibition and the image of Eddie Paul. Paul’s affiliation with the mafia or mob explains why Capone would even be mentioned. And Prohibition as the “glory days” supports the social and cultural need for the myth. For Castlewood residents, Prohibition was the foundation of their successful/ideal community identity. As a national figure associated with American Prohibition, Capone’s affiliation with the area somewhat legitimizes its claim of significance.

I feel that the Al Capone Castlewood myth deserves more attention. I hope to have an extensive paper proposal by the end of the semester.
﻿﻿﻿﻿﻿﻿

Posted by Lara Kuehling at 7:36 PM No comments:

From the Attic of the Ranger Station 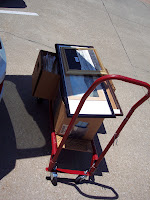 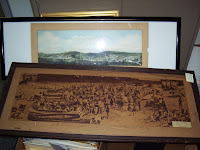 In this post, I would like to elaborate a bit on my archival adventure. The pictures above are the fruit of my work - two flimsy boxes and three very interesting photographs. Ok - I began working in the Castlewood ranger station attic in early May. As you can imagine, the room was dark, dingy, full of spiders and long forgotten recreation equipment. First, I emptied every box of paper and then organized the findings into archival categories. The majority of my findings consisted of two things: documents from a man by the name of Al Foster (who I now know to be a publicist, photographer, writer, and founding member of the Open Air Council), and old DNR publications. In June, after a month of nothing but strongly worded letters to and from Mr. Foster, I became discouraged and convinced there was nothing of value to my project.  However, as I neared the finish line, I came across three photographs. The first was actually a water color painting of something called, "Castlewood Village" and although it was not dated, it boldly stated that Mr. Raymond W. Smith was the President of this presumed company. This tid bit of information became more interesting when I found the second photo. The second photo, really a newspaper collage from an unknown news source, exemplified that "Castlewood experience" I hear so much about. The main photo displays scores of people crowded on Lincoln Beach ready to canoe down the Meramec River. In the corners of the photo are little side notes.﻿﻿﻿

I am happy to announce that Phase 1 (Archival) of my Castlewood project is complete! Two months ago, I began digging through boxes stored in the attic of the Castlewood Ranger station, with the goal of creating a very basic internal archive. However, after some self-education on archival basics, I discovered the hot, spider infested attic was the last place on earth any important documents should be. Thursday, Tessa (CW employee) and I made the trip to Jefferson City to donate my two large boxes of findings to the DNR archive.
While in Jefferson City, we took a look around the DNR archive, which contained interesting artifacts relating to every state park in Missouri. Boastfully, CW had three existing drawers!  Some of the information we found pertained to mundane park activities (toilet paper orders, new trails, and plant species), however, there was a rather large section about the Kaes House.
For those of you who do not know about it: The Kaes house is an old home located within the boundaries of Castlewood State Park. The location of the home is remote and unfortunately surrounded by private property. Currently, the house is stable but in need of aesthetic repair.  It was owned by a few families but most famously by the Kaes (Spelled several ways depending on where you look). It is rumored, and let me emphasize rumored, that Kaes aided the Union Army by holding Confederate prisoners on the property. It is also rumored that General Sherman spent some time in and around the area.
Personally, I am not very interested in the Kaes House. The historical significance is questionable (whether or not Confederate soldiers were held there is unproven) and outside of being old, I do not see much value in it. However, I know that there are several older homes locally famous because they are old – Hawkin House (Webster), Sappington House (Sappington), Oakland House (Affton), and so on. If the house belonged to Ballwin or Ellisville, instead of DNR, it might be worth refurbishing and exposing to the public.
That being said, I know there are several people who find the Kaes house fascinating…the photographs below are for you. 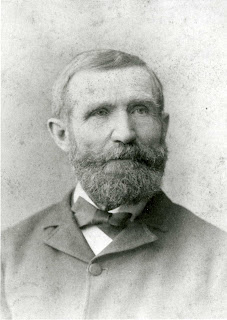 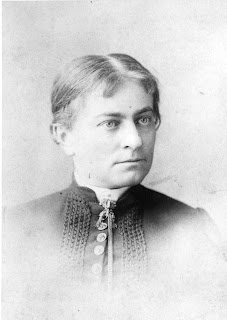 
Hi everyone! My name is Lara, and I am a graduate history student at the University of Missouri - St. Louis. I am currently working to uncover, or rather piece together the history of Castlewood - and I need your help.

What is Castlewood? Well, that is a long and complicated story. Today, Castlewood is a state park located in Ballwin, Missouri. However, from the late nineteenth through the mid-twentieth century it was a thriving resort community. The community itself was owned by several companies over the decades, but it was most commonly known as “Castlewood Camp.” Within Castlewood there were several hotels, bars (Speakeasies in the 20s -30s), dance halls, churches, restaurants, clubs, a beach, and eventually a large half-moon shaped pool.

Despite the fact that at one point Castlewood attracted over 10,000 visitors each weekend,  there is no comprehensive or accurate history of the area. I believe that Castlewood, as a resort and a tight knit residential community deserves a through historical analysis so that its impact can be fully appreciated.

Through this blog, I invite you to share your memories, pictures and thoughts about the community. If you or your family members lived within/ around the resort, or just visited on the weekends, I would love to speak with you in person. I can be contacted at lara.kuehling@gmail.com or larakuehling@yahoo.com. Thank you for your support!